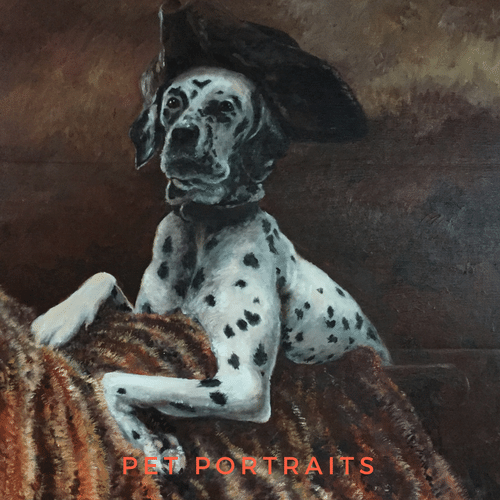 Francesca Wyllie has been creating art for many many years and other examples of her paintings can be seen in the gallery pages. She loves to pass on her knowledge so do take a look at her tuition page. She has had many private clients, both for her paintings and for tuition. Classes have included, watercolours, acrylics, oils, drawing, life drawing, sculpture in steel.

The Wyllie Fox pet portraits began with a rather naughty but lovable dalmatian dog called Lois, who inspired Francesca Wyllie (also known as the Wyllie Fox), to paint a series of dog portraits in oils. Accidentally, she found herself painting in the style of Old Masters and realised that the painting resembled a Rembrandt self-portrait. Rather than painting a straight pet portrait, Francesca wanted to portray the character of the dog. Lois had recently stolen a whole chicken from the kitchen and several other things mostly food related. Her haughty indifference and disobedient nature conjured up an image of a pirate. After breaking a finger she was unable to spread butter on her toast, but thankfully, she could still hold a paint brush and decided to concentrate on painting pets in oils

If you would like to immortalise your own pet in a unique oil painting, whether it be a Poodle, Cocker Spaniel or Dachshund or Heinz 57 do get in touch with Francesca using the contact page.